This weekend, I'm walking to raise funds for research and education in the FAAN Walk for Food Allergy. As most of you know, I have life-threatening allergies myself, and while J hasn't shown any signs yet, he's less than a year old, and the medical community is still trying to determine what causes people to develop allergies. It would be great if they find a way to guarantee that he won't inherit them, or at least to make life safer for him than it has been for me.

A huge thank-you to those who have sponsored me so far: Jason, Wayne, Pavana, Marisa, Daniel, Devin, Greg, Damon, Jesse, aunt Julianne & Craig, and mom & dad.

It's coming up this Sunday in Santa Monica, and FAAN has other walks planned across the country.

You can help with any amount down to US $10. If you'd like to contribute, please donate at my fundraising page.

(Cross-posted at K² Ramblings. And in case you're wondering where I've been this year, it's mainly been there, Facebook, and more recently Google+. Sorry I've let this journal kind of stagnate.)

I've been getting a lot of spam on this journal lately. On the theory that the spammers are targeting it because the latest public entry is 8 months old, I'm posting a new one.

So, spammers: Don't waste your time. This journal is maintained. Your content-free comments plugging dubious products will be removed, and you will be reported. Most of the time, they'll be screened, and won't even show up long enough to get you your coveted Google Juice even if you're lucky enough for Googlebot to crawl by before I delete them.

And a note to real people: I'm spending more time on Facebook these days. You can find me there, or on my main blog.

Could there be? Certainly. Have we seen any sign of it, or any reason to believe that it is there? Not yet.

I remember seeing a poster in one of my high school science classrooms that said something like, "Either we are alone in the universe, or we are not. Both possibilities are overwhelming." A quick Google search determines that it's a paraphrase of Arthur C. Clarke, though there seems to be some disagreement as to his original phrasing, and whether the two ideas were overwhelming, staggering, terrifying, etc. However it was phrased, I think it's a fitting summary.

kira_dark_wing
Another sleepless night
Do you suffer from occasional or frequent insomnia? Do you have any special tricks or remedies? How does it impact your life?
Reply 717

Well, it does take me a while to fall asleep, but really, what I'd diagnose myself with isn't insomnia as much as doesn't-have-the-sense-to-go-to-bed-at-a-reasonable-hour-itis.

Roommate from Hell
Have you ever had a nightmarish roommate? What made you incompatible? How did you eventually resolve your conflicts?
Reply 394

This isn't technically a roommate from hell story. It's a story about the ex-roommate who (I'm 99% certain) stole my credit card, then convinced his friends that I'd been going after him.

Bad idea of the day: “I’ll be back before the rain starts again. No need to bring my umbrella.”

I’m sure you can see where this is going.

I actually would have made it if I hadn’t decided to finish re-reading The Briar King. Three pages from the end — WHOOSH! Instant cloudburst!

So I finished the book, zipped the full-sized hardcover into my jacket, and proceeded to run from Coffee Bean to the parking structure, pausing under overhangs when I found them. There’s a surprising lack of shelter at the Irvine Spectrum, not counting the stores themselves. It wasn’t until I got to the structure that I realized I’d been running with a coffee cup in my hand.

Amazingly enough, even though I got soaked, I managed to keep the book dry! (One must have priorities, after all.)

Rotten tomatoes
What is the worst movie you've ever seen? Did you sit through it or walk out? What made it so dreadful?
Reply 874

Dungeons And Dragons. This was so bad that the group of friends I was with started heckling the movie, and the rest of the audience joined in! Of course, that means we found something fun about it, so it probably doesn't count. (Similarly, I rather enjoyed Van Helsing as a comedy, even though it doesn't seem to have been intended as one.)

The House of the Spirits. This should have been a great movie. Epic story, all-star cast...but it was intensely boring. 16 years later, I barely remember a thing about it other than being bored out of my skull, but the boredom itself left that much of an impression.

Transformers: Revenge of the Fallen. I think I should just copy what I wrote immediately after seeing it:

On the plus side, it had giant robots blowing stuff up, and they put more thought into the story than I expected them to. And there were certainly good moments spread throughout the film. On the minus side, the visuals were so complex that they were hard to follow. That’s a problem I had with the Transformers’ designs in the first film, too — they look insanely cool in still shots, but start them moving and you end up with two clouds of shrapnel fighting each other. Plus Michael Bay has a very different sense of humor than I do, which didn’t help. And amazingly enough, the movie was tedious. I don’t know how you can possibly take a movie about giant robots and explosions and make it dull enough that I checked my watch at least five times during the film.

Yeah, that one probably deserves the title.

I don't recall ever walking out of a movie before it was finished, unless the movie itself stopped due to technical problems (which has happened a couple of times). I've been seriously tempted to switch off some movies I've watched at home, though.

Spent Thanksgiving Day with the in-laws, who were helping host a huge Thanksgiving dinner for people at their church. So instead of the 8-12 people I'm used to for holiday dinners, it was 24. Hectic, but I discovered that I'm actually good at playing Jenga. (I swear, I haven't played the game since college, and I don't remember being any good at it at the time.)

With the warm weather, I'd been joking that we should have a Thanksgiving barbecue. The first thing I saw when we got there: a barbecue. Okay, it was being used to cook a turkey, but still...

There was also the highest pie-to-person ratio I have seen in a long time. I think there must have been at least 10 pies, if not a dozen. Probably enough for everyone there to eat half a pie!

We stayed in on Friday, avoiding the insanity of Black Friday sales (though I did look through the 15 or so emails from various online stores whose lists I'm on), then drove up to Westwood in the evening to see Equivocation (Shakespeare gets caught up in the aftermath of the Gunpowder Plot). 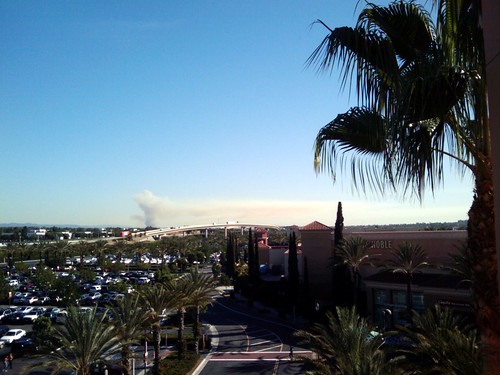 Smoke from a brush fire near San Juan Capistrano, seen from the parking structure at the Irvine Spectrum. I wouldn't have caught this if I hadn't checked Twitter when I sat down to lunch and seen an update from @LATimesfires. (As it is, I still had to make do with the camera on my phone.)

The picture was taken around 1:30. It's about 3:30 now, and I don't see a plume anymore (though it could be behind a building) -- just a smear of haze to the south and west.

According to the LA Times, the fire started when a tractor crashed into a power pole this morning.

I spent a good chunk of the weekend catching up on things I've been meaning to do for a while. This included:

A run to storage (also to look for

alenxa's pumpkin saw) to swap some books I've read recently for some books I've been meaning to reread. And also to pick up some comics that someone had expressed an interest in buying.

Email cleanup. I'm almost down to 150 messages! About 1/3 of what's left are either to-do posts I've sent myself or newsletters that I still want to read.

Going through the leftover bits from my last computer upgrade, and sorting out what to keep, what to sell, and what to hand over to e-waste collection. This also meant opening up my computer so I could wipe the old hard drives. While I had it open, I reconnected my ZIP drive, so we can go through our collections of ZIP disks and see if there's anything worth saving.

I also tried to wipe the old laptop's hard drive, but it froze about halfway through the process.

And then there was the pile of ~4 months' worth of junk mail that I went through looking for Tech Tool Pro 5 so that I could test the extra RAM in that laptop. It turned out the CD was somewhere else (sandwiched between two boxes), but at least I got a head start on that process. By the time I found it, it was too late to get started, so that's something to try tonight.

Also: watched two movies: Liar, Liar, which Katie had seen before but I hadn't, and Conan the Destroyer, which I only barely remembered seeing. Shortly before starting the film, I looked at the envelope and wondered aloud, "How the heck did they manage to squeeze a PG rating out of Conan?" Simple: cut out the sex, and minimize the blood. And amp up the cheese. Biggest surprise, though? Olivia D'Abo as the princess.
Collapse